Ethylene oxide treatment is an established technology, having been used for decades to sterilize materials - products for sale, waste for disposal, and items for reuse. In medical facilities ethylene oxide is used to treat catheters, stents, equipment with integrated-electronics, and other objects that cannot withstand the high temperatures of autoclaves. Scalpels, clamps, other metal objects and be treated with EtO although they are more commonly sterilized in autoclaves.

Ethylene oxide, usually abbreviated EtO, has the chemical formula C2H4O, is sometimes called oxirane. It is a dangerous chemical but has characteristics that make it ideal for batch sterilization of odd-shaped objects. Ethylene oxide is a gas (pure EtO boils at about 50 °F. It is often mixed with a carrier gas such as nitrogen. It can pass through plastic bags and other permeable packaging. In a well-designed process, the EtO envelops the waste and disinfects the surfaces.

EtO indicator tape (much like the indicator tape used in autoclaves) shows operators that the sterilization process has been completed. This tape is sold by medical supply companies.

As an antimicrobial material, ethylene oxide kills biological cells in the same way some chemotherapy drugs do. It is an alkylating agent. It works by chemically binding to DNA and proteins, destroying the ability of the cells to reproduce. Even viruses are susceptible to deactivation by ETO.

EtO treatment is a batch process. Think of it as baking a cake. The ingredients must be assembled and put in the sterilization chamber in the correct order, for the correct amount of time. Treatment takes place in a chamber which is sealed to prevent intake or exhaust of gas during the process. These chambers are sometimes called cells by equipment manufacturers. While the pressure and temperature may rise slightly during treatment, this is not what is lethal to the pathogens and incidental to the disinfection/sterilization process.

The manufacturer provides instructions on operation. A typical batch time is 4 to 7 hours. Operating temperature is 110 to 125 °F.

At the start of the cycle the temperature and pressure inside the chamber are ambient - the same more or less as the facility. Waste to be treated has probably been put in bags for transport to the EtO chamber. These might be polypropylene fabric or similar. Chamber temperature and humidity are recorded. Indicator tape, if it is to be used, is put in the chamber.

The sterilization phases include: 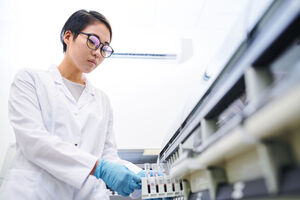 At the end of the batch time. the chamber is exhausted. This phase is called "degassing" Insert gas is introduced and the exhaust valve is opened to allow the ETO out. Because it is flammable the exhaust gas must be run through a flare or catalytic combustion unit. A volume of inert gas equal to several times the chamber volume is pumped through, bringing the residual ETO levels down. The gas flow is shut off and the operators check the chamber temperature, pressure,and ETO levels, If these are safe, the door can be opened and payload removed. The treated material is considered sterile and available for re-use.

Some ETO systems have multiple chambers with separate control systems so operators can increase effective throughput capacity by running one chamber in degassing mode while another is in sterilization mode.

Often operators are able to get permits that allow treating batches of waste without establishing sterilization of every batch.

The system is validated with tests representing typical waste streams. At a given type and quantity of waste and a given operation protocol, the testing team measures whether the treated waste is sterile. Sterilization is established by indicator tape or laboratory analysis and in a system validation more than one method will probably be used.

The permit will then be written with instructions (stipulations) for how it can be operated. These can include 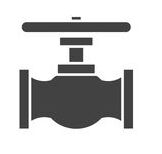 Low temperature compared to autoclaves and systems that destroy pathogens with heat. Ethylene oxide is also used in non-waste applications. Some manufacturers that need to sterilize their products before sending them to market use ethylene oxide.

Ethylene oxide is flammable and can form explosive mixtures. Storage and handling requires care. To control risks, ethylene oxide is mixed with nitrogen and/or carbon dioxide in storage and when it is delivered to the sterilization chamber. However, an accident resulting in release can be dangerous.

Ethylene oxide is poisonous to people and animals. OSHA and other regulatory agencies require detectors be present. The National Institute for Occupational Safety and Health says ETO should be regarded as a carcinogen when it comes to worker safety.

ETO treatment leaves residues on the treated materials. Although organisms are killed, there remains the possibility that the residues are toxic, which is why ETO is used less often than in the past.