Wherever there are people, there is medical waste. It is generated at many locations. These include:

You might be surprised to see some of those facilities on the list. Even dentists? Yes. Old style dental fillings were a mercury amalgam (alloy of mercury and other materials). While mercury is rarely employed in fillings put in today, dentists offices still deal with mercury waste when old fillings or teeth are removed. Regulatory agencies keep an eye on dentists offices as generators of hazardous waste containing mercury and lead. They also produce waste cotton and plastic which may be contaminated with body fluids as well as sharps common in other medical facilities such as scalpels, lancets, needles, and syringes. Funeral homes and mortuaries also produce sharps wastes.

Home healthcare providers are in a special situation. When the patient and/or family produce medical waste at home with no nurses or assistants involved, the waste is under no special regulation. It can be disposed of as regular household waste as far as the law is concerned. When a home healthcare provider is employed, it must use waste management practices similar to those used in doctors’ offices. 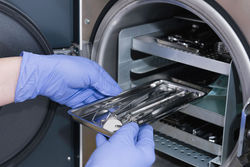 How many places produce medical waste? The state of Florida says there are 42,000 facilities in that state alone that generate healthcare waste.

Our best estimates of the number of various establishements that produce medical waste in the United States: Number of hospitals: 6146 Number of funeral homes: 21K Number of veterinary practices: 28K to 32K Number of tattoo parlors: 21,000 We estimate over 600,000 facilities in the US produce or deal with some sort of medical waste.

Waste from different facilities may be subject to different rules. In the state of Texas, for instance, businesses that generate less than 50 pounds per month of medical waste as classified as small quantity generators (SQG) while those that generate over 50 pounds per month are large quantity generators. The two types are subject to different rules for transport of the waste and on-site treatment.