Although one of the attractions of incineration is its promiscuity - it can effectively destroy many wastes - operations run more smoothly if there is some attention paid to what goes in.

Natural gas - Medical waste incinerators in the United States run on natural gas. Decades ago some may have been coal-fired or burned liquid fuel oil, but natural gas has taken over the market due to its low price and ease of handling and the fact that it tends to have less sulfur than liquid or solid fuels.

Air - Most incinerators run on ambient air - not on oxygen or air enriched with oxygen. The air pressure (which is a function of elevation) is a design input. Blowers can be selected based on air pressure and projected consumption of air.

Afterburners - secondary combustion chambers - designed to run with an excess of air of about 30 percent. A non-homogeneous feed will mean the combustion demands vary minute to minute, and a well-designed system monitors oxygen concentration in the exhaust and moves air feed rates up and down based on the feedback.

The critical factors to be confident of complete combustion are

Incineration notoriously produces dioxins and furans. This is one reason for two-chamber, or two-step incineration. The afterburner ensures complete combustion of organics.

The hot gas that results from incineration cannot be released to the atmosphere without treatment. This treatment reduces the temperature and removes two kinds of pollutants: particulate and acid gases. There are many technologies to accomplish this task: quench chambers, bag houses, scrubbers (venturi and packed bed), filters, mist eliminators. They work, but they add to the capital and operating cost. The economics work only if the incineration operation is big enough. This is one reason for the centralization of hospital waste incineration operations.

A term for pollution reduction equipment units taken together is “pollution abatement system”. Abatement does not imply complete elimination, but as a practical matter, well engineered and constructed systems can remove most pollutants. What kind of pollutants might come out of an incinerator?

Out of the primary chamber (but not afterburner)

Out of the secondary chamber

Regulatory agencies do not want exhaust from a 2000+ degree F incinerator exiting to the atmosphere. So a cooling operation is employed. This also reduces the temperature so that the wet scrubber and/or baghouse can be effective. The most common method is direct injection of liquid water to the stream. The quantity of water is such that it all vaporizes and the resultant stream is under 300 degrees F. This operation is called Quench.

Following cooling, the exhaust stream is cleaned to remove particulates and acid gases. Any incineration system in the US will be required by the EPA to have a pollution abatement system. 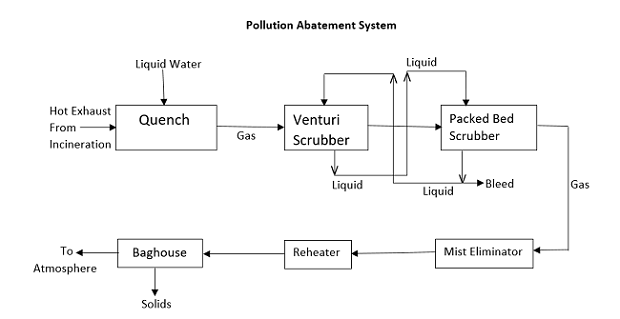 Venturi scrubbers contact the gas with a liquid (aqueous) stream such that the gas has a high linear velocity. Particulates entrained in the gas go into the liquid by force of momentum. The percentage of particulate matter removed depends on many factors: size distribution of the particles, particle density, linear velocity of gas when it contacts the liquid. However, in operation, scrubbers in incineration systems tend to remove over 50 percent of solids in a venturi scrubber.

Venturis are less effective at removing acid gases. The acids are dissolved in the gaseous waste stream and do not come out because of momentum.

Another kind of wet scrubber is a vertical cylinder in which the exhaust gas is introduced at the bottom and flows upward while liquid water flows downward. Physical objects inside the chamber promote interface formation between the liquid and the gas and absorption of gases. If the liquid includes dissolved caustic to increase the pH, acids dissolved in the exhaust are more easily scrubbed.

A common configuration is to channel quenched exhaust to the venturi and then to a packed bed. The venturi removes particulate matter and some acids, and the packed bed removes acids and some remaining particulates.

The mist eliminator is a metal filter that entrains droplets and hence leaves the stream drier and less likely to produce condensation. Putting one toward the end of the process lessens the chances of a white plume exiting the smokestack. Also, if further processing will be done (e.g. fabric filtration), a drier stream is preferable.

Baghouses are widely used in industry and warehouses where powdered materials are employed. They use fabric filters to remove particles.

A pollution abatement system has a blower at or close to the end of the stream. It blows the exhaust to the atmosphere and thereby maintains negative pressure inside the treatment train. The pressure differential moves the gaseous stream from the primary incinerator through the second incinerator, the quench unit, the wet scrubbers, and any subsequent units. These are powerful blowers and induce a pressure of negative 40 inches of water or more. If the blower goes out of operation the PAS does not work, and the incineration process may become too dangerous to operate. The control system shuts down operations in the event of a blower outage. To guard against this possibility, it is advisable to have a backup blower on call.

Nitric oxide cannot be scrubbed. Nitrogen dioxide can be removed to some extent with a caustic scrubber, but even so there is almost always NOx in the final exhaust. There is a way to reduce these emissions through selective catalytic reduction units, The word reduction here has two meanings. When these units work as intended, the amount of nitrogen oxides in the exhaust is reduced. It also refers to reduction in a chemistry sense - the nitrogen in the NOx molecule is reduced to elemental nitrogen.

These systems pump ammonia or urea into the exhaust stream and employ a catalytic bed. SCRs are employed in power plants where flowrates are very large. We are not aware of them being used in waste incineration systems.

Electrostatic percipitators are large expensive pieces of equipment that are intended to remove particulate matter from air or gaseous exhaust. Depending on how the process is run, it can remove a greater fraction of very small particles (under 5 nanometers in diameter) than wet scrubbers can. Configuations include Plate-Wire Precipitators and Flat Plate Precipitators and Tubular Precipitators (now rarely employed). A good document about this technology at is available from the EPA at https://www.epa.gov/sites/default/files/2020-11/documents/cs6ch3.pdf