Prions are the least understood of microscopic pathogens. They were discovered only in the 1980s. Partly because their risks are not well characterized and because they are difficult to detect, they pose a potential hazard at medical facilities.

Diseases that are caused by prions generally affect animals, but a few strike humans: fatal familial insomnia. Gerstmann-Straussler-Scheinker Syndrome, kuru, and most famously Creutzfeldt-Jakob disease, which is related to the bovine “Mad Cow Disease”. However, scientists suspect other diseases, including Alzheimer’s Disease, may be caused by prions. The incubation period for these diseases can be decades - years after the prions enter the body, symptoms appear. Prions are so little understood that they must be considered to pose a risk. 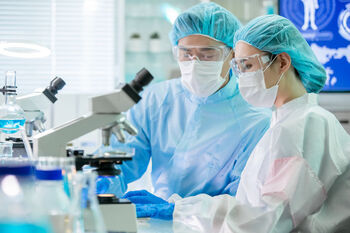 More than 30 years after the discovery of prions, we know that they can be pathogens and cause disease but how infectious they are (how many prions does a person need to get in his body to cause the disease?), how hardy they are, and what can destroy or disable them are not known. Like viruses, prions are not really alive, so it is incorrect to say they can be killed. For viruses, we say they are disabled or destroyed. Similar language would be appropriate for prions. We know that autoclave temperatures (250°F) can destroy viruses and we know viruses contain genetic information in DNA. We don’t know what temperatures are needed to destroy prions, and we don't know how they cause disease. It appears that some prions can go through autoclave treatment and still be pathogenic.

Conventional sterilization techniques are not effective against prions. Detergents and degreasers used to clean surgical tools don’t always remove or disable prions, and neither does heat treatment at autoclave temperatures. Attempts to use protein-degrading enzymes have not been successful. Scientists have been able to disable prions in incinerators (at much higher temperatures than autoclaves operate at), and alkaline hydrolysis at high pH.

Further, rapid tests are not readily available to determine if a surface has prions on it. Although scientists can find prions on surfaces, it is not easy and the technology and knowledge for identifying them has not spread to most medical facilities.

This poses uncertainty for the industrial hygienist and infection control officer.

If prions are present in waste headed for disposal, that is probably OK. Waste does not have to be sterile when it is disposed, but the waste should be sufficiently packaged so that pathogens are not likely to escape.

What the waste management professional needs to know about prion safety

If you know prions are present, be very careful and consider calling in a microbiologist for help.

Conventional sterilization techniques should not be assumed to destroy prions. These include both chemical antimicrobials and autoclave-temperature heat. Incineration temperatures will almost certainly destroy prions with enough residence time, but you will have trouble validating that no active prions survive. This technology is not established.

The University of Minnesota recommends incineration for non-tissue solid waste produced at their labs that is suspected to contain prions. For liquid waste, they recommend treatment with sodium hydroxide followed by disposal to the drain or in a hazardous waste pickup. Michigan State University's wensite mentions bleach treatment for liquid waste. Note that academic researchers generally work with prions known to cause diseases in animals, not humans. Disposal of animal carcasses is done by alkaline hydrolysis, even if they have been infected with prions.

Virginia’s Department of Wildlife Resources cautions hunterss about touching animal bodies that may have prions.

Interestingly, scientists have been able to synthetically produce prions, or at least parts of prions in vitro, using materials not of biological origin.

We at Malsparo don't know enough about prion safety to tell you what to do. We do know you should be careful. The University of Memphis has recommendations for its personnel who may encounter prions in the lab. It says incineration is the best option when feasible, but when equipment must be reused these cleaning methods are suggested:

"Surfaces and Heat Sensitive Instruments: Flood with 2.0 N NaOH or full-strength household bleach and let stand for one hour. Mop up and rinse with water. OR Clean with 1.0 N NaOH allowing a five-minute contact time, followed by a wipedown with 1.0 N HCl. Rinse with water."

Their document has more.