Sterilization in Management of Medical Waste

You don't have to sterilize medical waste. The waste management engineer is not tasked with sterilizing waste because the ultimate destination of the disposed waste is not sterile. The waste is often disinfected, either explicitly or as a consequence of treatment to control chemical hazards. Medical facilities do use sterilization in their operations, especially of equipment that will be used on more than one patient.

Cleaning a surface simply removes visible debris, dirt and dust. Sanitizing a surface makes that surface sanitary or free of visible dirt contaminants that could affect your health. Sanitizing is meant to reduce, not kill, the occurrence and growth of bacteria, viruses and fungi. Disinfecting a surface will deactivate most of the microscopic organisms.

The verb "to clean" means different things in different contexts. The commonplace meaning involves removal of dirt which is obvious to the naked eye. A place or object that is clean in this sense might still have a lot of microorganisms present, including harmful ones. Sanitizing is an attempt to get to a higher level of cleanliness. What do commercial kitchens attempt to get to? The attempt to sanitize, especially surfaces where food is kept or processed outside of a refrigerator.

Industrial hygienists have drawn a distinction between sanitizing and disinfecting. Both are employed to destroy germs - bacteria, viruses, fungi, and molds that may cause infectious disease. When a janitor cleans a public bathroom, his job is to sanitize the toilets. Janitors and restaurant cleaners are not out to disinfect.

Sterilization means to treat the object so that it is sterile: no life will grow on it or from it. In practice this means destroying or disabling all bacteria, fungi, viruses, and spores. Both items (e.g. surgical equipment) and rooms (floors, counters) can be sterilized. There are over 20 methods of sterilization including moist heat, dry heat, radiation, liquid chemical solutions, and gaseous sterilization. In health care facilities, autoclaves are often employed. Equipment is heated to 30 minutes at 121°C (250°F). 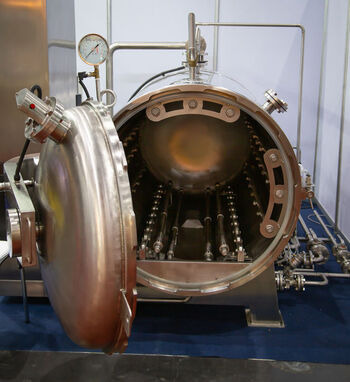 There is a middle classification between disinfection and sterilization. This is called "high-level disinfection" and the CDC says it is "complete elimination of all microorganisms in or on an instrument, except for small numbers of bacterial spores." The FDA says glutaraldehyde, hydrogen peroxide, ortho-phthalaldehyde, and peracetic acid with hydrogen peroxide can be used as high-level disinfectants. True sterilization involves killing the spores, too, and that is usually accomplished with high temperature.

There are advantages to using sterilizing agents that are gaseous. The agent can more readily penetrate to small niches that might escape contact with liquid if the object is immersed. The biggest downside is that gases pose hazards to workers if they are inadvertently released. Even if you do contain the sterilant, it has to be destroyed at some point and cannot be simply released to the atmosphere.

The State and Territorial Association on Alternate Treatment Technologies (STAATT) put out guidelines for levels of cleanliness. Rather than trying to draw an arbitrary line between the old terms disinfection and sterilization (which were created before we understood microbiology), the STAATT system denotes levels of “microbial inactivation.” These levels give everyone in the industry a common vocabulary for figuring whether treatment processes are good enough in a given situation. The levels defined for microbial inactivation are:

Level II: Level I plus 6 log10 reduction of parasites, mycobacteria, and hydrophilic viruses.