Analysts divide risk of potential negative events into two parts: incidence and consequence. Incidence is how often the event happens or how likely it is to happen in a given place in the next month or year. Consequence is how bad the event would be. Some events may be very unlikely but very bad, and measures to reduce those risks or put management plans in to respond to the event are merited. Other events are common but not so bad. At a facility that generates or stores medical waste many combinations of probability (incidence) and consequence (severity) are possible, but usually the consequences are not catastrophic.

Risks from medical waste include:

Planning and prevnative measures can lower, but never eliminate, the risk. Worker safety - occupational safety - is addressed b a discipline called industrial hygiene.

The general public thinks "contagious" or "disease" when they hear the team medical waste but it is worth remembering that risks from medical waste are both biological and nonbiological Public fears can be addressed with an environmental impact assessment and similar documents.

Pathogens in medical waste pose a disease risk, and if the disease is infectious, a potential public health problem. The reason we treat infectious waste before disposal is to substantially reduce (for all practical purposes eliminating it) risk of disease transmission. Diseases caused by improper disposal of waste include parasitic infection, lung infection, Bacterial Meningitis, HIV, Hepatitis B, Hepatitis C, fungal infections, and Bacteremia (bacteria in the bloodstream).

Despite the plots of some science fiction stories, it is unlikely that a release of medical waste would cause an epidemic or result in large-scale death and disease. It is theoretically possible but there are no reports of it ever happening. The US Centers for Disease Control and Prevention says it does not know of a situation in which waste leaving a hospital has “caused disease in either the health-care setting or the general community.” Further, a "dirty bomb" with infectious medical waste instead of radioactive waste is considered unlikely to be effective by experts. 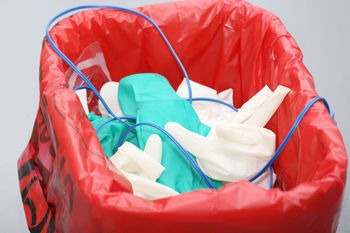 The EPA has said that, in general, biological risks posed by medical waste are greater for health care workers than for the general public. This is because the maximum disease-causing risk is at the point of generation and it declines over time.

The US Centers for Disease Control and Prevention states "no epidemiologic evidence suggests that traditional waste-disposal practices of health-care facilities (whereby clinical and microbiological wastes were decontaminated on site before leaving the facility) have caused disease in either the health-care setting or the general community."

Medical waste can also include non-infectious hazardous components. These might be materials that are deemed hazardous by their ignitability, corrosivity, reactivity, or toxicity to living organisms. Hospitals produce radioactive waste because radioactive materials are used in both diagnosis and therapy. And “Sharps” - physical objects that can pierce or lacerate the skin - are a risk in waste that leaves medical facilities.

Experts say the most risky type of medical waste as far as transmitting diseases is microbiological waste such as you might find at a laboratory.

In the writing of permits and of operations plans, engineers might conduct a risk assessment that includes a projection or prediction of waste risks at points in the facility operation and waste handling process. If the volume or composition of medical waste being generated varies, this risk assessment might be questionable, but it is often the only thing operators and regulators have.

Some diseases medical waste may transmit.

Radioactive materials decay - the actual atoms decay - so they lose their radiation level over time. The time-scale for decay is characterized by the “half life” of each isotope. These isotopes are often referred to as radionuclides or radioisotopes. Half lives can range from fractions of a second to thousands of years. In some cases the radioactive isotope decays to an isotope that is also radioactive, prolonging the period of radiation.

As with infectious waste, radioactive materials are more of a threat to human health if they enter the body. Alpha radiation does not travel through solid barriers and only a couple feet through air. If an alpha source is sitting on the table, a person has no reason to be concerned. However, if the alpha source becomes aerosolized and the person breathes in the material, it can cause cancer and other problems. Ingestion is also a possible route of entry to the body. Beta radiation travels farther than alpha, and is easy to shield, so long as the material does not enter the body. Gamma radiation is of greatest concern as it can penetrate walls. When nuclear engineers speak of shielding they mean physical barriers to protect people from gamma rays.

Aside from direct exposure to radioactive waste, people can be threatened if the external surfaces of containers get contaminated or if there is a hole in the storage container. Some radiation safety protocols specify the maximum amount of time a radiation source can remain in storage. Hospital or facility technicians, equipment operators, doctors, nurses, cleaning people, and waste management personnel are at most risk for radiation exposure.

The most common risks when storing hazardous waste are fire, rapid decompression/explosion, toxicity to workers and others in the facility, reactivity, and risks to the environment in the case of a release.

Likewise, the most common risks when storing radioactive waste are exposure to workers and others in the facility -radiation can cause short-term and long-term health problems - and risks to the environment in the case of a release. The most common risks when infectious or pathological waste are stored are the chance of passing disease to workers and others in the facility. The risk posed by a release to the environment - although the manager must consider it - tends to be lower than the risk to people inside the building.

Difference between hazard and risk

A hazard is anything (person, material, event) that can cause harm (to people, property, environment). Risk is the chance or probability that harm may occur.

Gas stations have a very hazardous material on site (gasoline) and most people come close to touching it when they pump fuel to their car. Indeed, most of us have at some point got gasoline on our skin. We probably don’t worry about it too much because we assess the risk as low. Electrical wires carry hazards (an electrical potential). In normal operation undamaged electrical equipment is not risky.

Engineers have methods to quantify risk. So do many other professionals. Everyone assesses risk in day-to-day life, sometimes incorrectly. Riding in an automobile is more risky than many people think. If a person is unfamiliar with a hazard he or she often errs on the side of overestimating the risk. This is why waste managers need to be careful when dealing with the public. Lay people probably won’t make the same assessment of risk that people in your organization will.

A bloody bandage is a hazard but it poses a risk only if a person is exposed. And risk can be managed and reduced (or increased) even when the hazard level is unchanged.

Difference between a risk and a threat

These are related. A risk is a probability. A threat is the entity or occurrence that will produce harm. Untreated waste can be a threat. The risk level depends on how it is stored, physiochemical nature of the waste, etc.

Waste managers often get involved with a formal risk management evaluation for presentation to a regulatory agency or insurance company.

Fault tree analysis can be employed in these situations as it permits operators to estimate individual risks of the storage, treatment, and disposal process elements. Other risk assessment methods include: