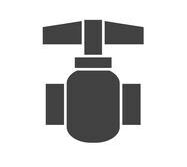 Chemical disinfection, primarily through the use of chlorine compounds, kills microorganisms in medical waste and can oxidize hazardous chemical constituents. Chlorine bleach has been used for disinfecting processes for years – you might use it to clean your underwear and kill the e.coli. Chlorine compounds are used in swimming pools to reduce the risk of disease transmission. Ethylene oxide treatment is another chemical process. It is used to disinfect or sterilize materials equipment that will be reused. It is too expensive to use on equipment or waste that will be sent to a landfill - incineration is better.

The EPA identifies chemical processing as the most appropriate method to treat liquid medical waste. Treated liquid waste can usually be discharged into the sewer system. Sometimes it goes to a holding tank for testing before discharge.

Microwave radiation is used to treat wastewater sludge and as a heat source to treat medical waste. Microwave treatment units can be either on-site installations or in mobile treatment vehicles. The processing usually includes front-end shredding of the waste, both to increase the efficacy of the microwave treatment and to reduce the volume of the end waste for disposal. If the waste is dry, water is added and the wet waste is introduced to the microwave chamber.

It basically works like a souped-up version of your kitchen’s microwave oven. Typical operation is at 2450 Hz. While an autoclave provides heat from outside the waste, like a conventional kitchen oven, the microwave unit transmits energy as microwaves and that energy turns into heat inside the wet waste.

Microwave disinfection works only when there is water in the waste. because the radiation directly works on the water, not the solid components of the waste. For this reason, treatment units are often supplied with a humidifier. Processing time is determined by the manufacturer and experience of the operators, but somewhere about 20 minutes per batch is typical. Mechanical treatment is often positioned upstream of the microwave in order to make sure the waste pieces are small. Smaller pieces enhance the heating action as microwaves are able to penetrate to where infectious microbes are. With enough power the water is converted to steam and makes all of the waste around 100°C. The entire process takes place within a single vessel. Bacteriological and virological tests are periodically conducted to ensure the process is effective. A common bacteriological test examines eradication of Bacillus subtilis. 99.99% reduction of spores is considered a benchmark.

Treatment of medical waste through exposure to microwaves is less expensive than incineration although it will not chemically alter hazardous materials that way incineration can. This method is not recommended by the EPA for the treatment of pathological waste. Microwave treatment can also melt syringes, but it is rarely used for this purpose. Put your syringes in a sharps container and have them processed through mechanical destruction.

Microwave treatment is sometimes referred to as irradiation. However, it should not be confused with irradiation with gamma rays (from radioactive elements) or electrons.

Irradiation does not change the appearance of the waste so process designers often install mechanical grinding or shredding upstream. This also makes the waste pieces smaller, which tends to enhance the efficacy of the treatment.

Unlike some other treatment methods, irradiation requires a dedicated place – there are no mobile treatment modules that use radiation. It is fairly expensive to build an irradiation facility and operating precautions must be taken to protect workers from radiation. These are among the reasons this method is not widely used, especially when heat treatment methods are typically just as effective. The efficiency of irradiation as a sterilization process depends to a large extent on the total energy delivered, but even then waste surfaces facing the radiation source get more sterile than the waste on the shaded side. Odd-shaped waste pieces may not get adequate exposure to the radiation, if contaminated surfaces face away from the cobalt source. Heat treatment, by contrast, brings every piece of waste to an adequate temperature for sterilization if done correctly.

Although it is rarely used, vitrification can be an effective treatment for medical waste. The solid waste is mixed in when glass is formed (vitrification means production of glass). The high temperatures kill pathogens and some combustible material may burn or pyrolyze, resulting in an off-gas. Remaining material is encapsulated in glass, which has a very low diffusivity. There is little danger of hazardous materials leaching out of glass in significant quantities. The vitrified waste can therefore be put in a landfill with confidence, although if there are radioactive materials in the waste, that landfill may have to be one that is certified to accept radioactive waste. Vitrification is often mentioned as a long-term solution for radioactive waste produced at nuclear reactors; this wastr is generally hairier more radioactive than any medical waste.

Plasma treatment has been developed and proposed as an alternative to incineration. However, despite some interest in using it for medical waste, it has not found widespread use.

Mechanical treatment does not kill pathogens or disinfect equipment, but it can reduce waste volume and increase the surface area in preparation of further treatment or disposal. Crushers and milling machines break down solid pieces of waste. Mechanical shattering or splintering of waste can also alter its appearance, which can be useful in lessening the psychological impact of the waste on human observers. More on shredders.